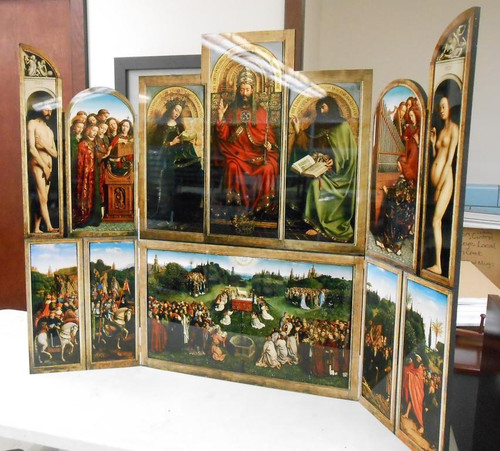 About the Original Painting
Completed in 1432 by Dutch painter Jan Van Eyck
Officially titled Adoration of the Mystic Lamb.

"Jan van Eyck's Ghent Altarpiece is on any art historian's list of the ten most important paintings ever made. It is also the most frequently stolen artwork of all time. Since its completion in 1432, this twelve-panel oil painting has been looted in three different wars, burned, dismembered, forged, smuggled, censored, hidden, attacked by iconoclasts, hunted by the Nazis and Napoleon, used as a diplomatic tool, ransomed, rescued by Austrian double-agents, and stolen a total of thirteen times."
-From Stealing the Mystic Lamb: The True Story of the World's Most Coveted Masterpiece

Considering all the famous artwork made during the Renaissance, Ghent Altarpiece ranks on any short list of the best Renaissance art - and it is also one of the most significant religious works in the entirety of art history.
Called Ghent Altarpiece due to its location in the Saint Bavo Cathedral in Ghent, Belgium, it was created by Hubert van Eyck and Jan van Eyck (ca. 1390 - 1441); because Jan van Eyck completed the Altarpiece after his brother's death, it is impossible to know who created which panels.
These panels depict the Redemption of Man, a popular theme in Renaissance art.

In the upper registry, or row of panels, God the Father appears in a frontal pose with a raised hand and a crown at his feet; he is flanked by John the Baptist, who wears a green robe over his hair shirt, and the Virgin, as in the Deesis. On either side are choirs of music-making angels, including Saint Cecilia at her organ. Adam and Eve are portrayed illusionistically in stone niches.

On the step behind the crown at the Lord's feet is a noteworthy inscription:
On his head, life without death. On his brow, youth without age. On his right, joy without sadness. On his left, security without fear.
These words capture the Franciscan conception of God as the benevolent Father of the human race, supplanting earlier conceptions of a more harsh, austere God.

The bottom registry of the Altarpiece is dominated by its most famous artwork, The Adoration of the Lamb by All Saints. Laden with symbolism, The Adoration depicts the sacrifice of the Lamb of God, as the Just Judges, The Warriors of Christ, the Holy Hermits and the Holy Pilgrims convene. 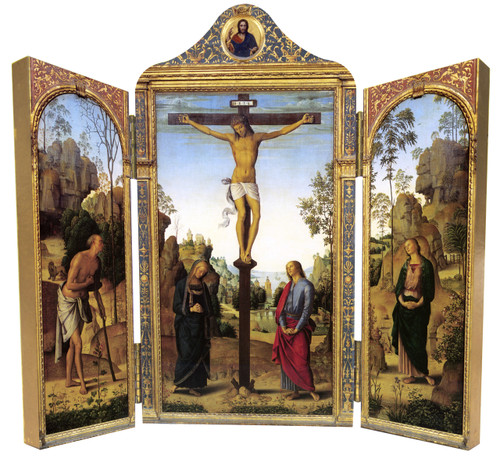 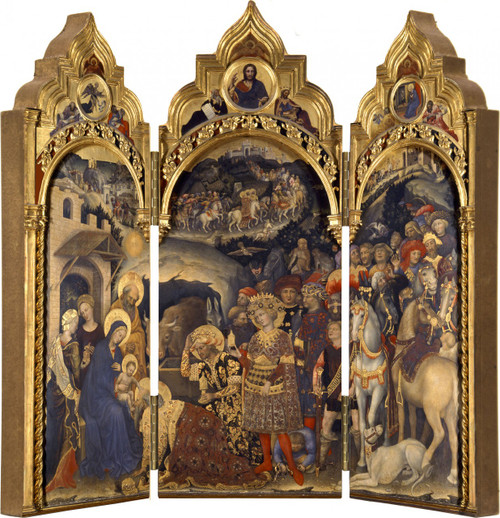 Adoration of the Magi Triptych Plaque 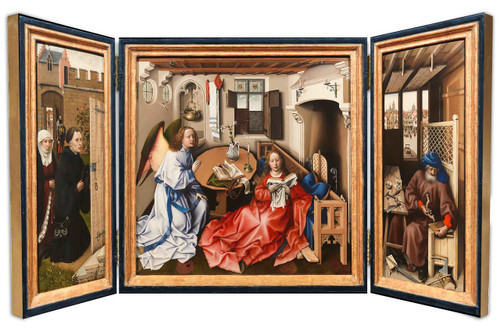 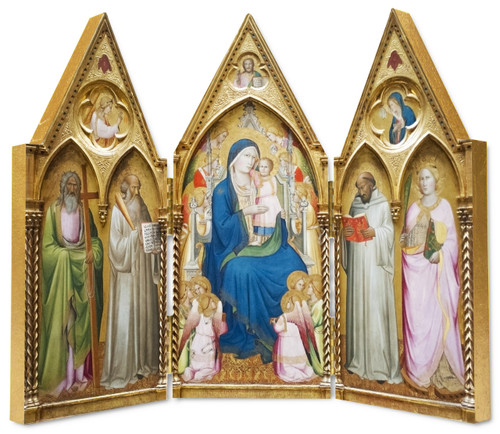 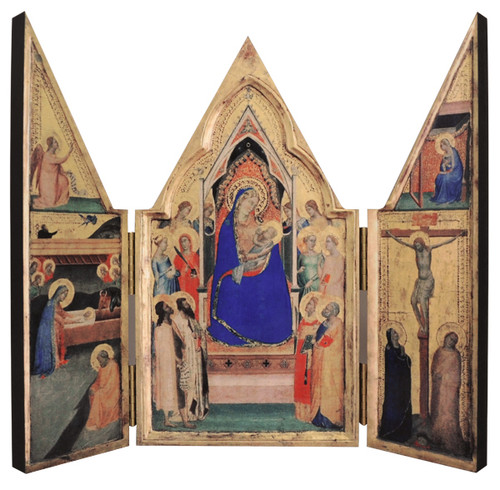 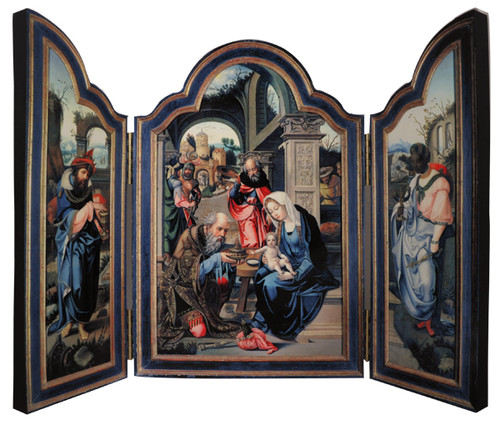 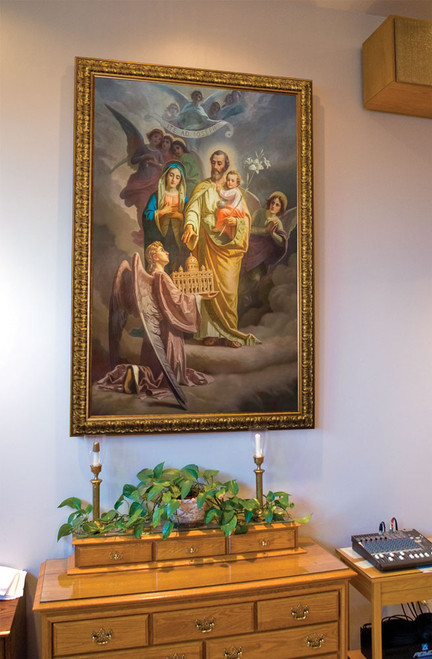 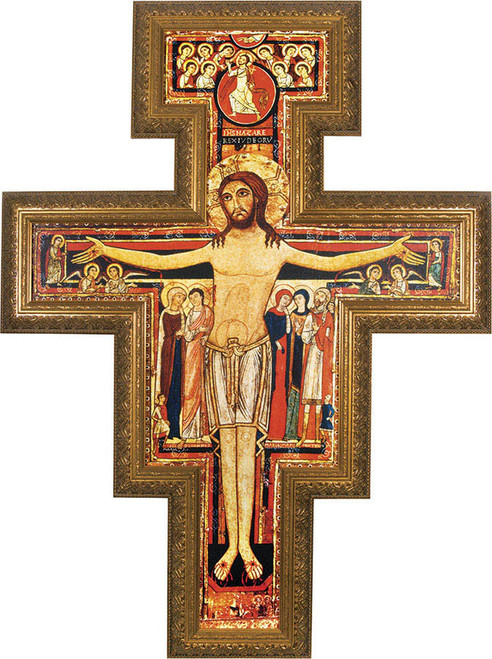 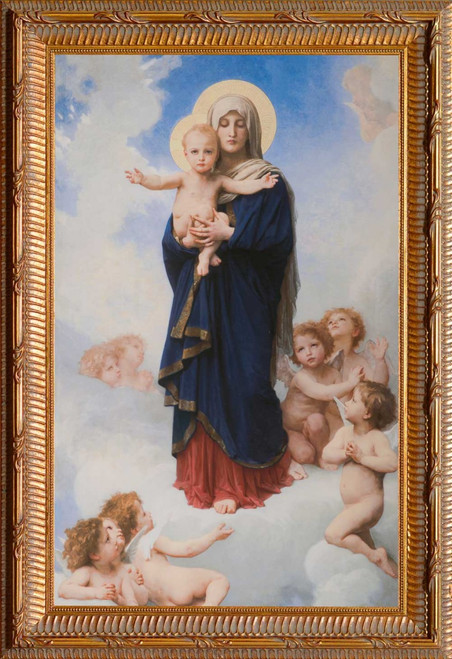 Our Lady of the Angels Church-Sized Framed Canvas 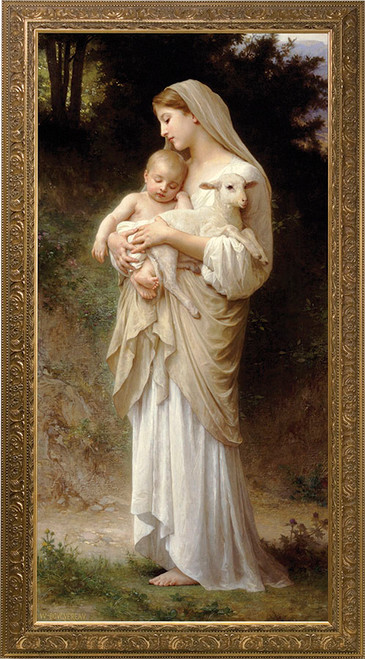